Using Small Talk to Find
Something in Common 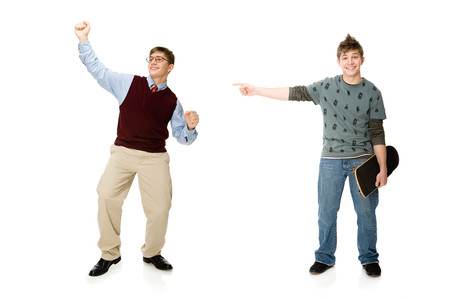 After all, you are both in the same place at the same time.  That's one commonality you share.  Whether or not you're acquainted with the person, you can begin a conversation based on your current whereabouts:

Bulk Up Your Small Talk

Although only one of the above questions is truly open-ended, each of them can get someone talking if you use them.  You're exploring.  This is typically known as "small talk."  It's initial conversation.

You are skimming the surface to find commonalities.  And once you find one, ask follow-up questions to keep the conversation going for a while.  It may go something like this:

"Have you attended one of these events before?"

"Oh great!  Please tell me more about the organization so I might know what to expect."

And off you go, down the path of what may turn into a terrific conversation.

Tell Me About It

It's no secret that people love to talk about themselves and their interests.  So when you use the words "Tell me . . ." you're likely to learn something about that person or perhaps find something in common.

And when that's done, simply say, "Tell me more about . . ." and you will learn more.  Of course it helps if you provide feedback with an "um-hmm" and a nod here and there to display your interest.

You often find yourself genuinely intrigued with what you are hearing.  It can definitely turn into a win-win conversation.

The thing is, you may show up to a business or social event expecting to muddle your way through until such time when you can leave without being rude.  But asking the right question or using the "tell me" technique can change the entire course of the event.  You never know what you may learn, or who you may meet (or get to know better).

A good friend once attended a party and ended up standing next to someone she had no interest in speaking to.  Fortunately, she asked how he knew the host and the conversation slowly began.  By using follow-up questions, she discovered he was a chef who was about to open his first restaurant.  A short while later, she had an invitation to his opening night and then became a regular diner at his establishment where she and her friends always received VIP treatment.  But not only that, the chef became a dear friend--one she wouldn't have if she had ignored him at the party.

It Works Both Ways

Imagine what it's like to be on the other side of you.  Are you putting someone at ease or adding to the nervous energy you both may be feeling?  This is where body language becomes important.

When asking questions or saying "tell me . . ." you may be perceived as someone performing a duty rather than an authentic person who is interested in getting to know someone.  To avoid this perception, make eye contact, wear a relaxed smile, and keep your arms uncrossed so you don't appear to close yourself off.

If you are relaxed and friendly, you are more likely to put others at ease.  You also come across as a good listener.  This makes engaging in conversation a much more pleasurable task!

How to Be a Good Guest