A Taste of Etiquette History 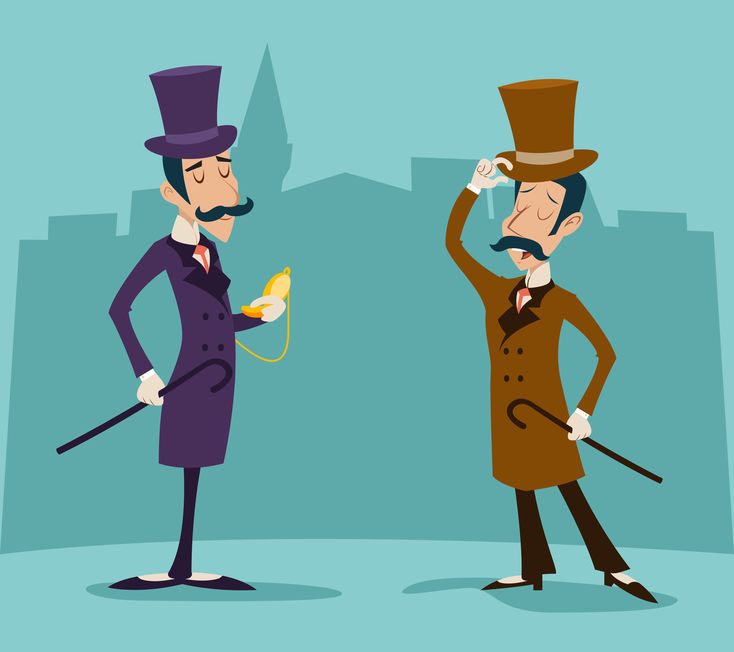 We all use etiquette in our daily lives whether we’re aware of it or not.  You can call it good manners, tradition, or culture, but etiquette guidelines govern our social behavior.

In order to successfully interact with other humans and enjoy fulfilling relationships, we must meet certain expectations.  We present ourselves as cooperative and maybe even “nice” so we might win the cooperation and trust of those with whom we share a community, neighborhood, or home.

As our world evolves – along with culture and traditions – so do our social expectations and, therefore, our manners.   Some centuries-old guidelines still apply, and some don't.  Without a doubt, guidelines and codes of social behavior will change in the ever-evolving “modern” ages.  They always have.

Looking at etiquette history, we can assume that many etiquette rules developed as a result of demand for personal safety and respect.  During primitive ages, as the number of people living together – perhaps sharing a cave, as it were – grew, they developed expectations of behavior in order to get along peacefully.

They came to understand they needed each other for survival. United, they had a better chance of protecting themselves against enemies and invaders, whether human or beast.

Primal humans realized the fine line between living by natural impulses and the need to cultivate cooperation.  Then, as today, good manners and etiquette simply made things run more smoothly.

The Evolution of Etiquette History

Many notable changes have occurred since the second World War.  The growing number of women working outside their homes called for workplace equality, and nearly a century later changes continue to challenge professional, personal and family life.  Family meals have become more casual, lessening the demand for fine china, crystal, and silverware.  And office dress codes have evolved to much more casual attire than previous decades.

Examples of etiquette evolution:
Hat Tipping
When knights in medieval times intended friendliness, they would lift their face masks to be seen.  Lifting your armor mask eventually evolved into the custom of “tipping” one’s hat to greet or acknowledge another, especially a woman.  When a man passed another man, he recognized him by a mere touch of his hat.  These days, this is rarely seen as the most popular hats tend to be baseball caps.

Forks
Spoons were the first eating utensils used, then came knives.  Later, it was discovered that two-tined forks were good for spearing foods, then came forks with additional tines for moving food to the mouth.  In 1533, Catherine de Medici brought several dozen small dining forks from France when she arrived in England to marry Henry II.  Considered a trifling oddity, they eventually caught on in European courts.  As silver became plentiful, so did the development of many types and varieties of these utensils (remember the pickle fork?).  It became increasingly common to have family silverware sets in the western world.  However, as noted above, evolving to a more casual lifestyle has now made silverware sets an exception rather than a rule.

Finger Foods
In many cultures, eating with the fingers is the norm.  In Ethiopia, a featured part of the cuisine is thick, spicy stews, intended to be eaten with the fingers along with strips of flat, spongy bread, and served on a communal plate at the center of the table.  The entire meal is a communal experience.  An Ethiopian saying is, “Those who eat from the same plate will not betray each other,” and serves to make friendships stronger.  In the U.S. it is impolite to pick up and eat with your fingers when not at a picnic or a fast-food restaurant.  But in many households, casual lifestyles are bringing about more casual foods that are eaten without utensils.  It will be interesting to watch how this practice evolves.

Calling Cards
A century or so ago, when you called on (visited) someone at their home, you would hand the person (or butler) answering the door your calling card as a record of your visit, whether or not you saw the intended recipient.  This social practice went by the wayside as visits, and society, became more casual, but held on in the business world.  Business cards were exchanged during office visits, lunches, and networking events.  They still are, to a certain extent, but technology is helping us rely more on social media and digital contact lists.

These are but a few of the evolving guidelines in etiquette history.  We could also consider the many changes taking place in how we communicate: written letters to text messages, engraved invitations to electronic invitations, phone calls to social media posts.

As humans and social expectations evolve, so will our manners.  But throughout our continued evolution, we must never lose our concern for the proper way to respect one another’s personhood.  After all, this is the reason The Golden Rule, the original etiquette rule, has been followed for so many centuries.

A Modern Definition of Etiquette